Welcome to the Northwest vest

Two posts in one week? I'm on a roll! And I started working this week!

This make was a whole new kind of fun: I did my first test pattern!

Morgan from Thread Theory asked for testers for a vest pattern in March. She and her husband own a (mostly) menswear pattern company near Vancouver, B.C.  I've made a couple of her patterns, and Mikey likes them quite a bit.

So when she called for pattern testers, I e-mailed her that day. Mikey LOVES vests, and I have made him quite a few using McCall's 2447.

Morgan named hers the Belvedere. (And she calls it a waistcoat — so cute. I guess that's a Canadian thing.)

I considered doing a real muslin but instead went with my usual wearable muslin route. We bought the main fabric from Fabric Recycles years ago, and I never had liked it as much as Mikey had. 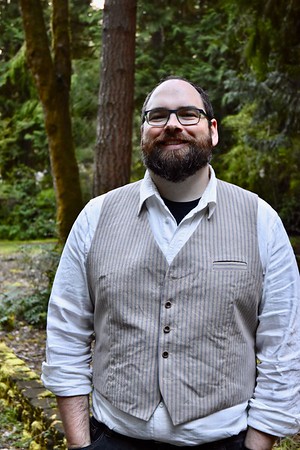 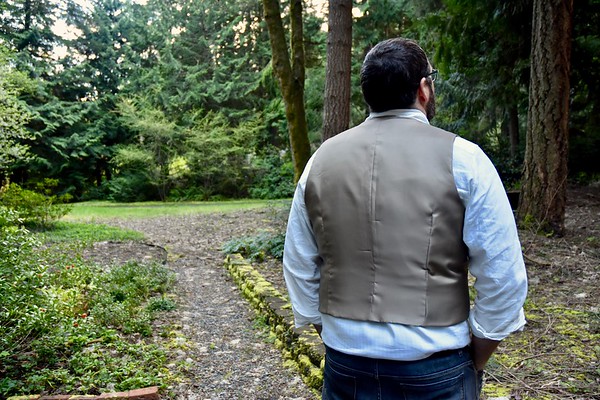 Bonus: a little preview of our yard!

I cut size 4XL, adding an inch to the length. The pattern lists 6-foot-2 for this size, and Mikey is 6-foot-4. There's still about 2.5 inches from the bottom of the vest to top of his jeans. (Mikey modeled for these photos at the end of the workday, so his shirt is partly covering the waistband.)

Morgan said she would specify in the pattern that the vest is designed for dress trousers, which sit higher than many men wear their pants today. I'll have Mikey try this vest on with other pants to see how long we need future versions to be. He really likes this one, but I'm not sure how much he'll wear it given how high it stops on him. 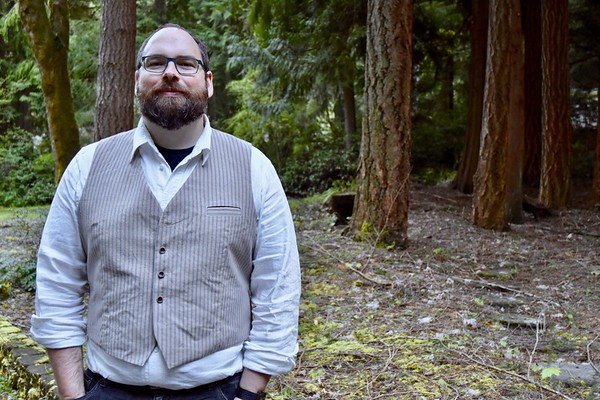 Alterations for fit were easy. I let out the sides three-eighths-inch at the hem, grading to only an eighth-inch under the arm. There was a little gaping at the chest, so I took in the shoulder seam a quarter-inch on the neck edge, grading to no change at the outer edge.

Mikey wanted a pocket, but we both thought three was excessive for his needs. Plus I wanted to test the welt pocket but didn't have time to get that many done before my deadline.

The construction method for this pocket is fantastic. I've made a lot of welt pockets since I started sewing, and this was the most solid, easiest version.

I like the size of the upper pocket. It's perfect for business cards, which is all Mikey will likely carry in a vest.

I adjusted the button placement because the top mark was too close to the seam. You can see where it was in the second photo, marked with a tailer's tack. Morgan said she was going to change this for the final pattern, so my placement may be slightly different from what comes out in the final release. 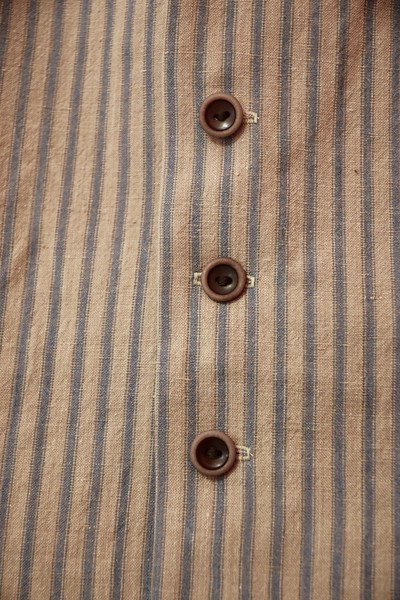 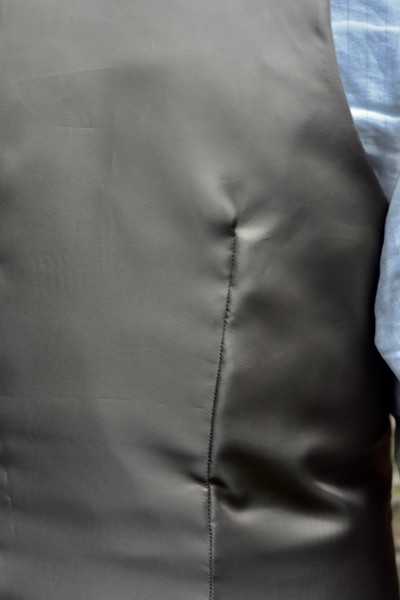 The buttons and lining fabric are from Ester's Fabric here in Bainbridge Island. I'm so happy to have a great local fabric store so close! Kansas City had a serious lack of local fabric stores until Modern Makers opened. Plus I hear there's a good one in Bremerton (about a 50-minute drive away) and one that looks good in Seattle.

I already love the staff at Ester's. And it's been really hard not to add to my stash when I go in there. I did buy a long-sought-after black stretch cotton my first trip in. More on that in my next sewing post.

The lining fabric is a rayon with a cool diagonal texture to it, which you can see in the photo below. The photo above is a better representation of the color.

Burn test (and wrinkling) reveals the main fabric as cotton with maybe some linen mixed in. 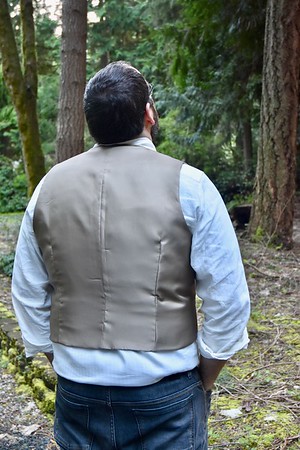 The best part of this pattern is probably the construction order. If you've ever sewn anything that's fully lined, it can be a pain in the ass to turn right side out. The way Morgan does it is similar to the burrito method when sewing a shirt with a yoke.

It made it so I could do most of the construction before Mikey tried it on. But I could still easily make all those adjustments to the shoulder and side seams. So if I were sewing for someone far away, he could come in for a fitting near the end of construction. And even a slow sewer like me could get it finished that day.

I also appreciated the lack of a belt in the back. (If you don't know what I'm talking about, look at the back of a ready-to-wear vest.) That was the first change I made to his McCall's vest pattern.

Thread Theory has you interface the entire front of the vest to add structure. I think it also added to the ease of the welt pocket construction. I used cotton fusible interfacing. 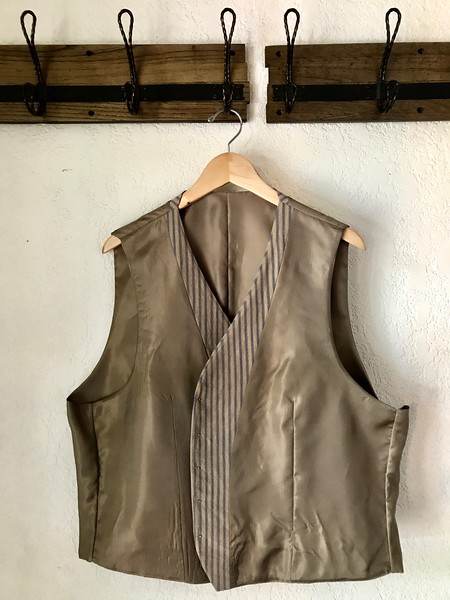 My facings didn't quite line up at the shoulder seams. But this might have had something to do with my alterations there.

Morgan said she plans to release the pattern May 1. Thread Theory usually releases a PDF pattern first with a paper pattern to follow. You can check the website or come back here, and I'll link to it. (Edit, now that the pattern is up, here's the link.) I recommend this pattern. It's one of those patterns that makes the wearer look fancy but is pretty easy to make. Plus if you've wanted to try welt pockets, this was the least scary way to do it. 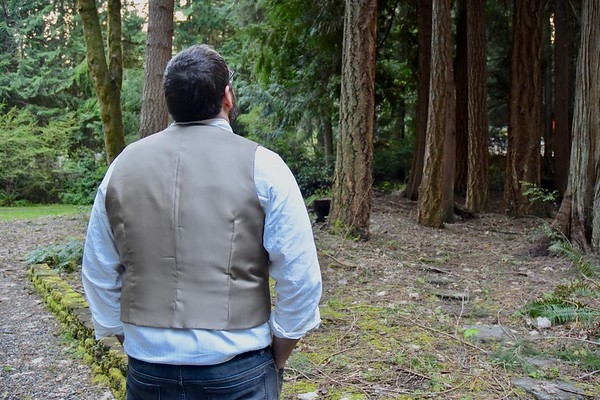 While we took these photos, I told Mikey they look like they could be on Thread Theory's website. Welcome to the Pacific Northwest!

Newer: Home is where the Element is